The craziest surf photographs you have ever seen are made by a sixteen year old called Leroy Bellet.

He wasn’t the first to get this angle, that honour goes to Laurent Pujol (although East coast US photographer Seth Stafford got some similar results without a tow assist which might have been even earlier?).

And the waves he’s doing it at aren’t as heavy as The Right – where Mark Matthews and Taj Burrow had a few goes at the double tow.

But I get the impression that he does it a lot more than those guys, and he throws in the flash element too, meaning he can do it at dawn and dusk when the light’s best. And that means his photos are the best barrel shots in surf photography.

Watch the first wave on his video “Double or Nothing”, he gets four flash shots off inside the tube whilst behind his subject, then gets spat out for the claim too.

I wont embed that one because the video below has the same awesome waves in it, and some talking from Leroy himself too:

Look at the size of the housing and flash that he’s holding onto whilst taking these shots: 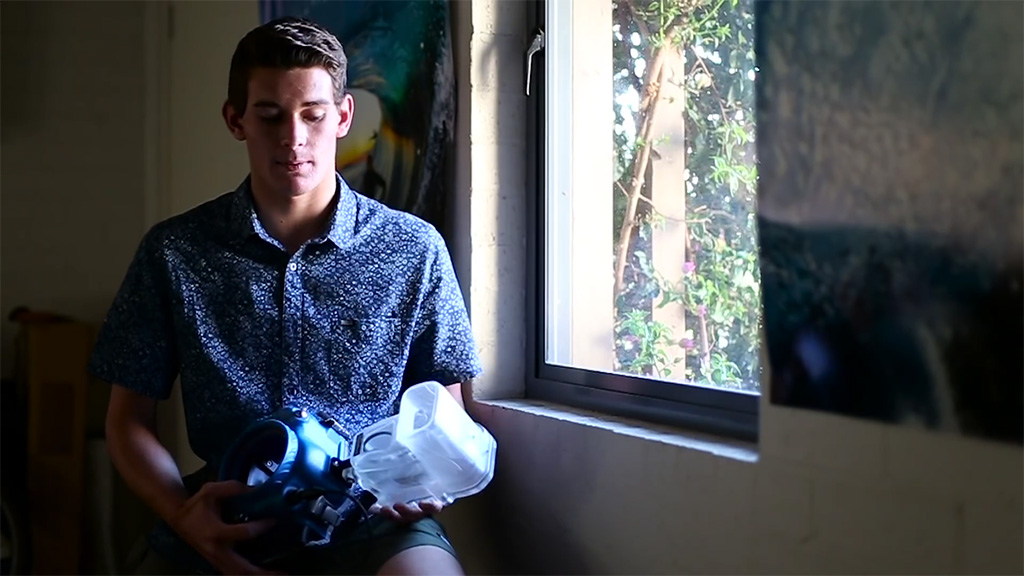 There’s a couple of places you want to check out if you want to find out more, the first is Leroys website, where he talks about the motivation and lists the equipment he uses and even goes into the settings he uses too.

Secondly check out Aquatech’s blog post on the subject too, it’s got a little more detail on the equipment, as you’d imagine, and also a little bit of different stuff at the start too, so it’s worth reading both but I’d start on his site as there are more images to gawp at.

What equipment does Leroy Bellet use?

Here’s what we can gather from the blog posts and videos:

How can I get the same shot?

Not that I’d recommend it, because it’s dangerous, but there’s at least one budget friendly way you could re-create this type of shot at your local slab or shorebreak.

The GoPro + bodyboard option – take off behind your friend on a bodyboard, Seth Stafford style, and shoot with your GoPro, it would be a lot easier with something like the KNEKT GPLT trigger and you don’t have to fork out for a Jet ski.

You can’t get a flash synchronised with a GoPro very well unfortunately, it’s pure chance until they release some sort of sync cables, so you’re only going to be able to do this one during the day.

More stuff coming soon, as always, any questions about surf photography send them to me at ben@learningsurfphotography.com or leave a comment.