I’m fascinated when surf photos are used by other industries. Here’s an example I came across when reading about newsletter images on the user experience (UX) website nngroup.com.

This quote is from someone who took part in a survey that included an American Airlines newsletter promoting flights to Australia and New Zealand:

“The picture was not that great either, it’s just some generic picture of a surfer”

I thought that sounded a bit harsh, it’s a fisheye shot with a surfer driving down the line about to get barrelled on a fun looking wave. 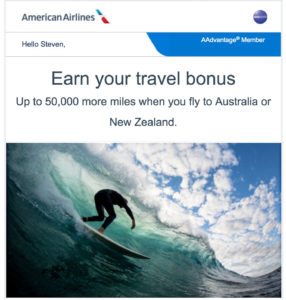 To anyone who doesn’t surf, this is how they see most photos of surfing. Your average surfer would be stoked with that photo, and I’d be pretty happy to have taken it too.

Let’s take a look at where this image came from so we can get a better appreciation of the effort that went into it.

Where did this surf photo come from?

Usually surf photos that show up outside of a surf environment are sourced from a stock photo website. It would be too expensive to commission an image like this for a non surf related email newsletter.

The easiest way to find an image is to screen grab that portion of the web page (or download the image if possible), and search for it using a reverse image search.

Google image search is my first choice as it’s easy to use and usually has the most results. Tineye is a good alternative that can help if you don’t get anywhere with Google.

In this case there are a few results that point towards a YouTube video for Adobe stock image plugins.

A freeze frame on the relevant part reveals all the details I need. Now I know at least one stock service that I can find it on – Getty images.

Who shot this surf photo?

Also shown in the freeze frame is the photographer: Mike Riley. I’ve written about Mike Riley before on the site, I know that because learningsurfphotography comes up as one of the top results when you search for “Mike Riley surf photography”.

A quick search on the Getty site leads me to the image itself, and the option to licence it for £485 GBP ($650 US) for the largest size or £50 GBP ($67 US) for the smallest, which would have been plenty for the email campaign. It’s taken in Australia and the rider isn’t identified.

Here’s the image embedded from Getty:

What equipment was used to take this surf photo?

There’s no meta data in the image on Getty, so I’m going to guess the equipment used based on my post about Mike Riley’s photo from 2013.

In 2013 he was shooting this style of shot with a Tokina 10-17mm fisheye (set to 14mm) and a Canon 5D mk III, so I’m going to assume this was shot around the same time with that setup. If it was shot later it might have been with a Canon 1DX.

Why did American Airlines choose this surf photo?

My guess is, they needed a photo that represented Australia or New Zealand, and the marketing person spent 15 minutes in stock photography hell bouncing between Koalas, Ayers Rock and surfing before going with the first half decent surf photo they could find.

Newsletters like this get sent out a few times a day. I love the nngroup website and read most new articles they publish, but the person at American Airlines just thought it would look cool compared to another, even more generic, stock photo.

The same image is used in lots of places like the BBC and several times on thoughtco.com, including being the only image illustrating this post about Kanoa Igarashi (I am almost certain it’s not Kanoa Igarashi in the photo).

Why are the general public not impressed by surf photos?

It’s a pretty cool shot for us surf photographers, because we know how much of a challenge it is to get into that position and nail the photo. The light isn’t great, the wave isn’t amazing and it’s not as critical as many of the other photographs that Mike Riley published from similar sessions (check some of them out on his blog). That’s why it ended up on Getty as a stock image and not on the cover of Surfer magazine, like another one of Mike’s similar shots did:

It’s not a bad photo, but it’s not cover shot material either, and the type of surf images that end up on big stock image websites are just that, the B grade shots that aren’t good enough for surf media.

The amount of content that’s published every day is mind boggling, there’s no way for marketers to come up with quality images without using a stock photo library. If they’re anything like American Airlines, they use one of the big providers like Getty, so they can find a photo of anything they need within a few searches. The general public see photos from big stock libraries, the only surf photos in those libraries are B grade shots, so the public only get to see B grade shots.

It’s a bit of a shame, but on the bright side, us surfers get to see the A grade photos, you just need to know where to look. And when the general public, including your non surfing family and friends,  get to see a really great surf photo that you’ve taken on your wall – they’re more easily and genuinely impressed.