I recently shot a session at a shorebreak wedge, there were plenty of people around so I got to put a new technique to the test, in the past I’ve pretty much just pointed by camera at the surfer straight on and fired away as they come close enough.

When writing a caption for a recent post about water photographers on the North shore of Hawaii I noted how they were all pointing the camera 45 degrees from the surfer towards the shore, so this time I made a conscious effort to do the same, to see how the images compared.

Here’s a shot from last year, it’s taken with my old Sigma 10-20mm lens at the same spot I was shooting this time.

And here’s one I took on the recent shoot with the Tokina 10-17mm fisheye using the new pointing-towards-the-beach angle.

As you can see the composition is more pleasing, you get more of the relatively interesting beach in the shot rather than the face of the wave.

However, there were a couple of occasions where it didn’t work as well, for starters I haven’t got my head around shooting across my body with my right hand, you need to do this to shoot left handers, I currently use one hand when shooting right handers and both hands when shooting lefts, it screws up my aim and I always twist the camera a lot more on left handers (or shooting out of a right hand barrel).

I think I’m going to work on shooting left handed for these situations, it’s the obvious and simplest fix and will allow me to use this technique whatever waves I’m shooting with the fisheye, if left handed shooting doesn’t work I’ll try shooting with my hand on the shutter button on the top of the housing rather than the pistol grip, to see if I can straighten it out more, it’s starting to annoy me now as there’s one right hander that I really want to get a nice out of the tube angle on that I keep messing up.

The other time it doesn’t work is when you get really close to the surfer, or point it a little too far towards the beach, so that the person is at the edge of the frame, where the most distortion happens, obviously this isn’t an issue with just the face of the wave at the edge of the frame, but it’s very easy to see the distortion in a persons body or face, so it looks pretty weird.

I think the solution here is just to shoot more fisheye, the correct framing will come with more experience, when someone gets closer they’re generally going past you so they should get closer to the centre of the frame as they near you, and if they’re not close it’s just a case of training yourself to point the housing in a better direction. 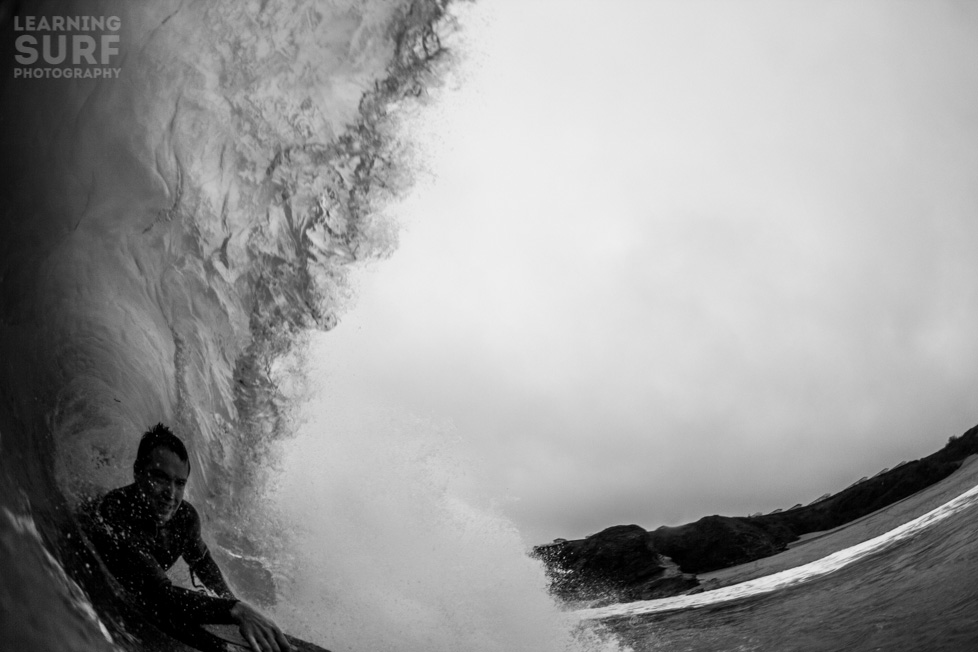 So there are a few tips for you, I’ll be working on it next time I’m shooting fisheye, check back soon for another update on flash photography with the fisheye, I hope to show you how to cheaply and simply get set up for shooting flash barrel shots.

To check out more of the photo’s from this session have a look at the facebook gallery here.