I’ve said before that I think GoPro are going to release a GPS BacPac sometime soon, and Garmin have announced the Virb XE which has a GoPro mount, very similar spec’s to the GoPro Hero 4 Silver that I use, and a built in GPS/accelerometer/gyroscope combo for logging all your data.

But GoPro haven’t announced their version yet, and Garmin are a few months away from release so after using the Rip Curl GPS watch and the Trace surf tracker device, and not being completely satisfied with either, I wanted a way to collect my own GPS data for use with video overlay software Dashware and my personal surf logging system.

The Rip Curl GPS watch and Trace are both waterproof and ready to go surfing, the 860E is tiny and inexpensive by comparison but it needs to be even smaller to fit into a GoPro back door

I did a fair bit of research and came up with a pretty decent attempt at a DIY GoPro GPS BacPac that met 3 out of 4 of my requirements for the best case scenario:

The Best GPS Data Logger For Your GoPro GPS BacPac

The first thing I needed was a GPS data logger, I started looking for a waterproof device that I could attach to the back of my GoPro, but they were all prohibitively expensive and pretty bulky, in fact nearly every GPS logger I found had a screen on it, for my purposes a screen would just take up valuable space and add unnecessary expense. 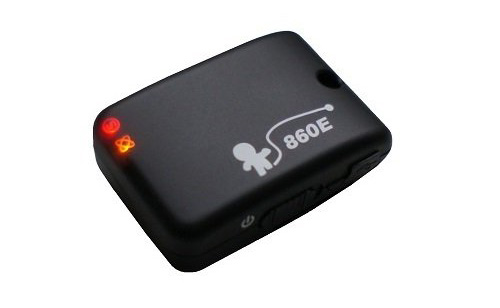 Small enough to fit inside a GoPro case and very affordable, the 860E GPS logger does everything I need it to and nothing more.

So I moved on to looking for a device with no screen that I could fit inside the GoPro Hero 4 case, ideally within the extended BacPac, exactly like the official Battery BacPac.

Enter the 860E GPS data logger, sometimes called the iBlue 860E, it’s made by Transystem Inc. and is the smallest, most basic battery powered GPS data logger that I could find for a reasonable price, you can pick it up from Amazon for around $50 in the US.

Before I ordered it I made a scale model out of cardboard and made sure it would easily fit inside the GoPro Case, in the worst case scenario I would just put it in a spare goPro case and stuff it in the back of my wetsuit rather than attaching it to the GoPro as a BacPac.

Bear in mind that you might not need to purchase some of these things, I happened to have a big roll of foam, a suitable screwdriver and a roll of Duct tape so I only had to buy the GPS logger and the back doors, so it set me back around $60 in total.

I’ve written some more detailed steps below but here’s the breakdown: 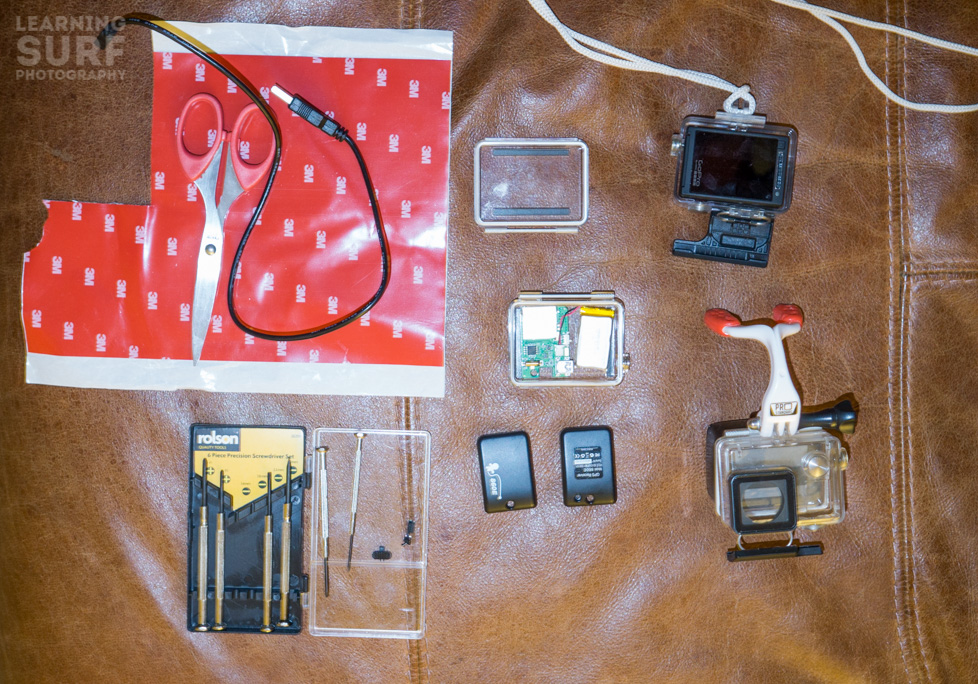 As you can see I was originally going to have the battery next to the PCB and GPS chip but in the end I secured it back to the PCB with some 3M sticky foam so I could access the USB port and switch more easily.

There’s one screw holding the two halves of the case together, it’s tiny so you’ll need a jewellers style screwdriver to remove it, I used a 1.4mm flat head in the end but it’s actually a Philips head screw.

With the screw out you just carefully lever the two halves apart, start at the end with the hole in it and carefully pry it open, once open the on/off switch and the rubber cover for the mini usb port can be removed easily.

You will then see the PCB with the GPS chip and LED’s on it and a very small battery, they are glued together but it doesn’t take much to separate them, at this point I carefully unplugged the battery from the pcb so I could more easily work on getting the battery unstuck from the case.

It’s secured there with some double sided sticky foam, you’ve got to be careful when dealing with the battery, you don’t want to pierce the outer layer or break the wires that connect it to the pcb, with some patience you can get your screwdriver in and carefully work on the sticky foam pad until it comes away form the plastic.

I’ve got some 3M double sided sticky foam which I used to stick the battery back onto the PCB securely, now the naked 860E will fit perfectly into the extended GoPro Backdoor, I used the official one but you can get cheaper alternatives, I just didn’t want to risk flooding my housing and ruining the camera for the sake of a few dollars.

With the PCB on the outside for a better chance of reception I just filled the other space with three pads of self adhesive foam, before adding the top layer I stuck a piece of duct tape across the foam and onto the battery to create a hinge, allowing me to swing the 860E up and give me access to the micro switch which controls the power and the mini USB port for charging and transferring data. 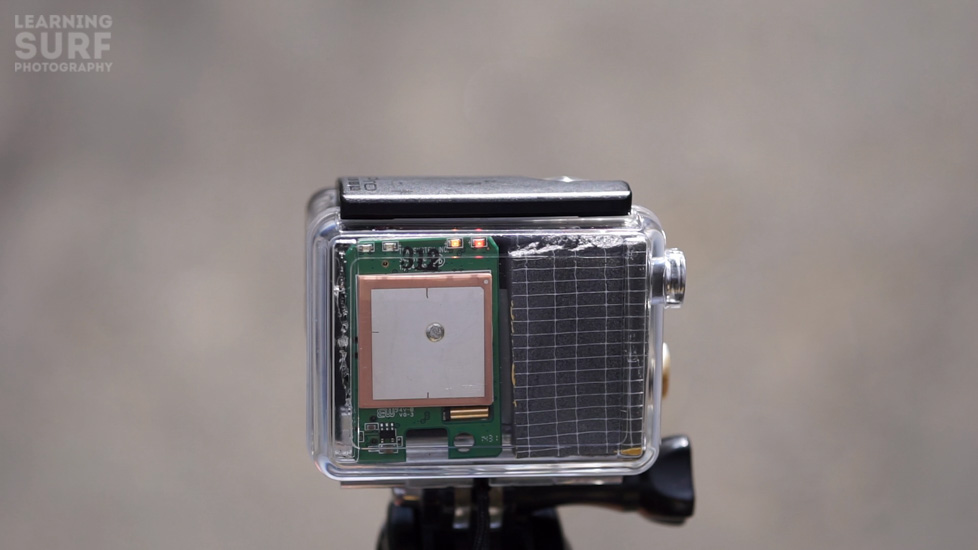 In this frame grab you can see the two LED’s at the top centre illuminated to show you the GPS location is being recorded, the foam on the right serves to keep the GoPro snugly in position as well as adding some vibration protection for the GPS electronics.

With the DIY GoPro GPS BacPac assembled I just had to snap off my current back door and snap on the new one, happily because the BacPac is designed to work with any Hero 3+ or Hero 4 housing you can use it with the budget friendly Hero camera as well as any of the Hero 3, 3+ or 4 range.

If you want to use this set-up with your GoPro Hero or Hero 2 you just need to get the right back door for your housing.

You can see the LED’s through the back door clearly and you have easy access to the on off switch and the USB port once it’s opened up. It’s as water tight as the official GoPro Back doors are, so as long as you’re sensible it’s as sturdy as your original GoPro, and not too much heavier either.

Setting Up The 860E For Surf logging

The finished BacPac mounted to my jaws clamp and goose neck mount, because I’ve used the official Back door the waterproof rating is still the same and it will fit onto all the original GoPro mounts and even my Pro Standard Grill mount too.

The default settings are designed to automatically work out what type of activity you are doing based on your speed and then choose the most appropriate interval between logging your position, we’re going to want to change this.

The Trace device logs your position 5 times per second (I don’t know what the Rip Curl device does because they don’t let you get your GPX data out of it) so I wanted to get it as close to this as possible, if you use the fairly user friendly GPS Photo Tracker software that is supplied with the 860E you can configure the device to record the position every second.

In my comparisons this was enough to get a good idea of your speed at any point and the number of waves you’ve caught.is probably fine, but I’d seen the lovely GPX files coming out of the Trace, so Ideally I wanted to get an even more frequent position log, to do this you need to open up the decidedly non user friendly GpsView software.

With GPSView open you can see the live readout of the GPS receiver and it can go up to 5 times a second, unfortunately I haven’t yet found a way to change it to this setting permanently, so it reverts back to location every second the next time you start logging. This is something I’m going to be looking into.

Can I get my GPX File Out Easily?

Yes, you can use the Photo Tracker software provided, it’s pretty well laid out and gives you the ability to correct your track or cut off any points that aren’t relevant before exporting it, which is a useful step if you want to upload your whole file to something like Strava. 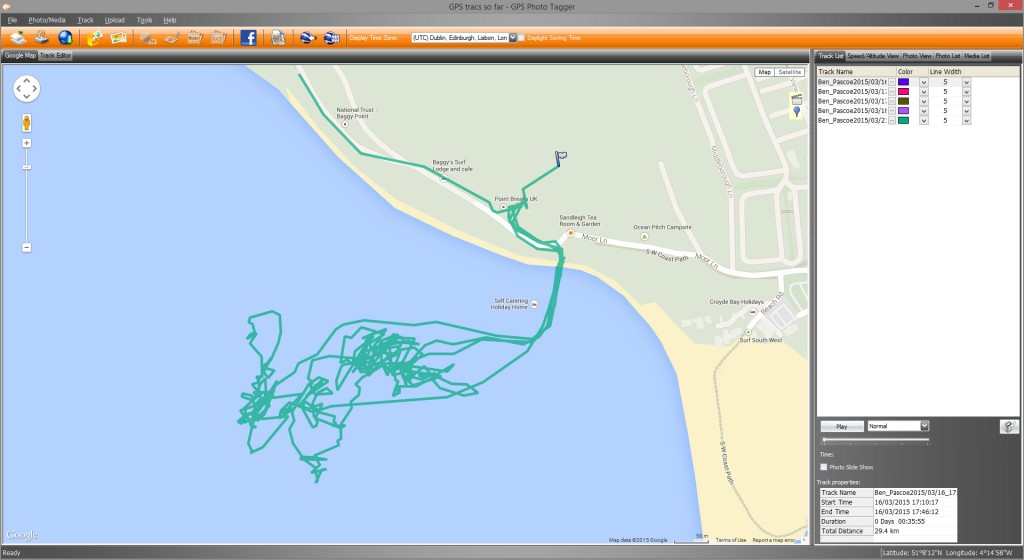 This is the software provided with the 860E, it allows you to do some basic editing of the tracks and export them in various formats, it looks like a mess now, but it’s fairly easy to get the wave and paddling data out of it.

It’s also a great start for combining your GPS data with any video files you have from the session, I’m going to be covering how to do this for surfing in detail in part 3.

How Do I Get The Wave Count and distance travelled info?

The big advantage of the Trace or Rip Curl (and Garmin Virb when it’s released) options is the fool proof plug and play interface, you don’t need to know anything about how GPS loggers work to get your data out the other end, unfortunately if you go down the cheap GPS Logger route it’s not so simple, luckily I’ve already done the hard work for you though, keep an eye out for part 2: editing your surfing GPX file.

You can view the track in Google maps in the software provided, and edit the track points themselves to some extent, but after trying nearly every piece of freely available GPX editing software out there I settled on the free GPS Track Editor for it’s ease of use and impressive functionality. 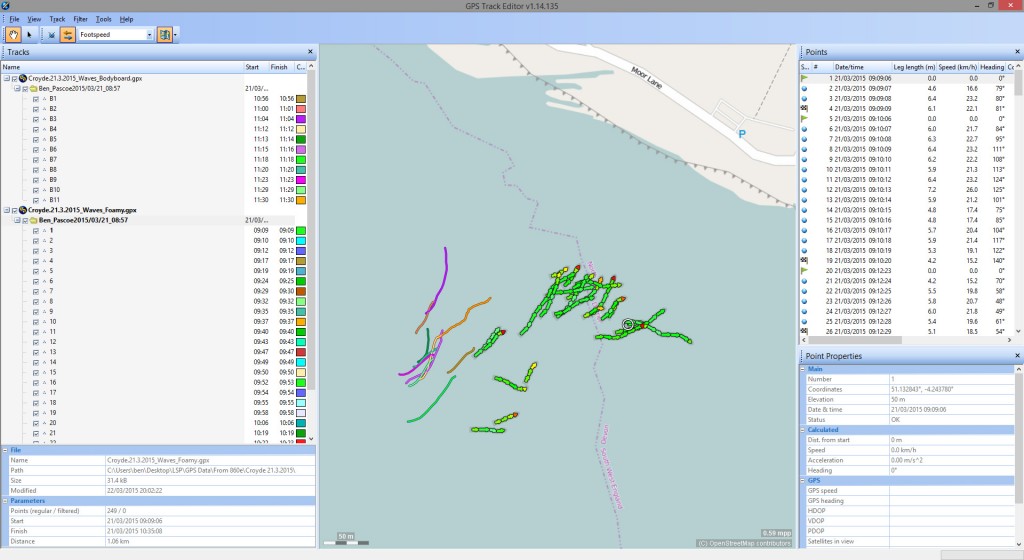 You can see the waves that I have separated out using the software, it’s pretty intuitive to do although I’d like to make it more of an automated process in the future.

In part 2 I’m going to go through exactly how to edit your GPX file down to just the waves so you can display it nicely on a map, I’m hoping this step will be even easier in the future too with less manual processing involved.

Part 3 will concentrate on combing your GPS data with GoPro footage by displaying the stat’s on a video overlay using Dashware.

If anyone else has done any of this before let me know in the comments, I really think it’s a great way to help get better waves in the future.