I learned a couple of things whilst shooting yesterday at Spot M, if you just want to see some of the photo’s check out the album on facebook, but read on for some more basic lessons on shooting (and preparing to shoot) fisheye. 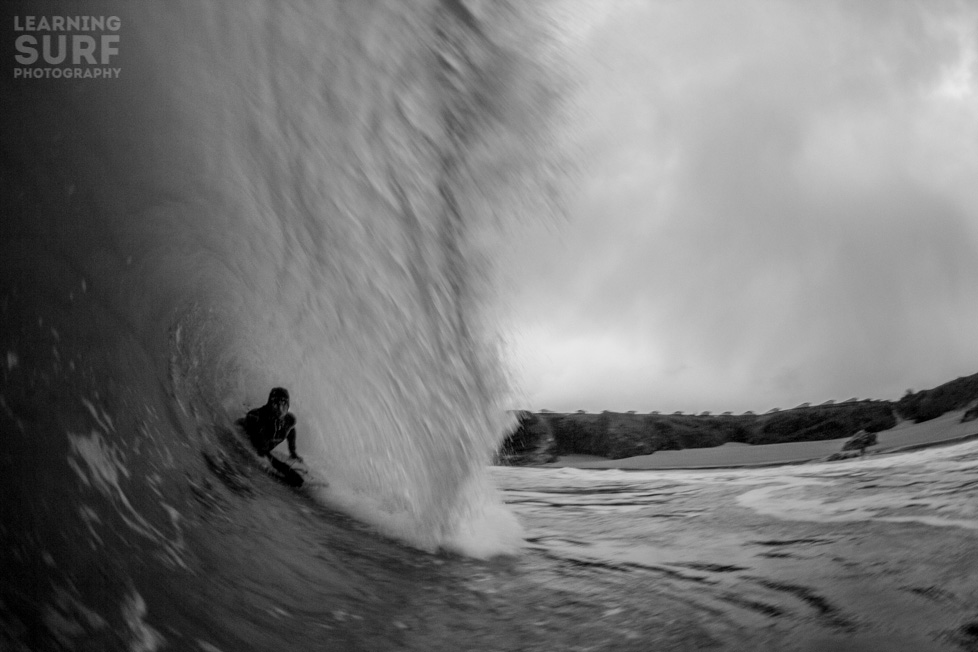 Lesson 1: Sunrise is not predictable

Firstly, I was shooting in Shutter Priority with my ISO at 400, I set the camera up in the car park, a little way away from the beach in this case, as I knew I’d be surfing first, then getting out to take some photo’s when the light got good, we were there well before the sun made an appearance to make the most of the tide.

It’s the third time I’ve shot at ISO 400 rather than Auto ISO like I usually do, I’ve been trying it out since getting some tips via the comments on one of my recent posts from Luke Gartside (see his photo’s here: lukegartsidephotography.co.uk), who suggested that to force a smaller aperture, and therefore increase the amount of the shot that is in focus, I could choose a relatively high ISO like 400 and shoot in shutter priority.

This worked well the first two times I did it, during these sessions I was shooting in reasonable light and I’m pretty sure that the overall sharpness of the images was improved, I’m working on a proper post about sharp photo’s with some examples from these sessions so watch out for that if you’re curious.

Unfortunately this morning was very cloudy and just as I thought the sun was creeping up enough another big bank of cloud came over, but the tide was good and there weren’t many people so I knew I’d be able to get into position for a few of my friend Bens waves. 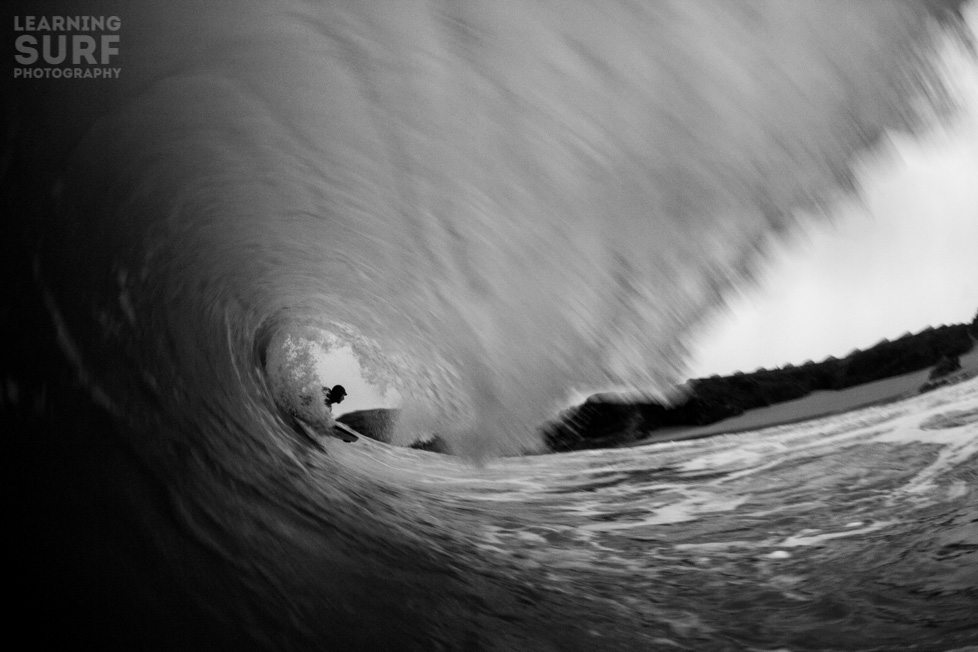 Shooting that slowly means there’s always going to be motion blur, but this isn’t always the worst thing in the world, I kind of like the effect of a fast moving lip if you can get a relatively crisp outline of the rider, in the example above I think it works OK, and would be better than not having any photo’s from the session.

Lesson 2: Don’t use Kitchen towel to clean the inside of your port

It’s a busy time of year, so I hadn’t really sorted out my housing properly since last time I used it, that’s a lame excuse for wiping out the inside of my dome port with a piece of kitchen towel (absorbent disposable kitchen tissue stuff, not an actual towel), and leaving a tiny speck of tissue on the inside of the port, right in the middle.

Luckily I was focused manually so the camera didn’t think it was what I wanted to focus on, but it does appear in all the images as a blurry spot, it’s easily fixed in Lightroom but it’s annoying and very easily avoidable, I have a couple of lens cloths and an air blower in my camera bag but I was in a rush and didn’t even check the port until I was on the beach ( I had my DIY neoprene dome port cover in place for the walk down).

You can see the bit of tissue clearly in this shot because it’s more visible with a narrower aperture, this one was after the sun had come up so with ISO 400 in shutter priority the camera had pushed the aperture right up to f10 even with the shutter speed of 1/1000.

Lesson 3: Swimming with no hands is hard

I’ve been wanting to get some video with the GoPro Hero 3+ Black edition from my point of view behind the camera for a while, so rather than mounting it on the top of the housing I had it on my bobber floating handle and held it in my left hand whilst shooting with the housing in my right hand. 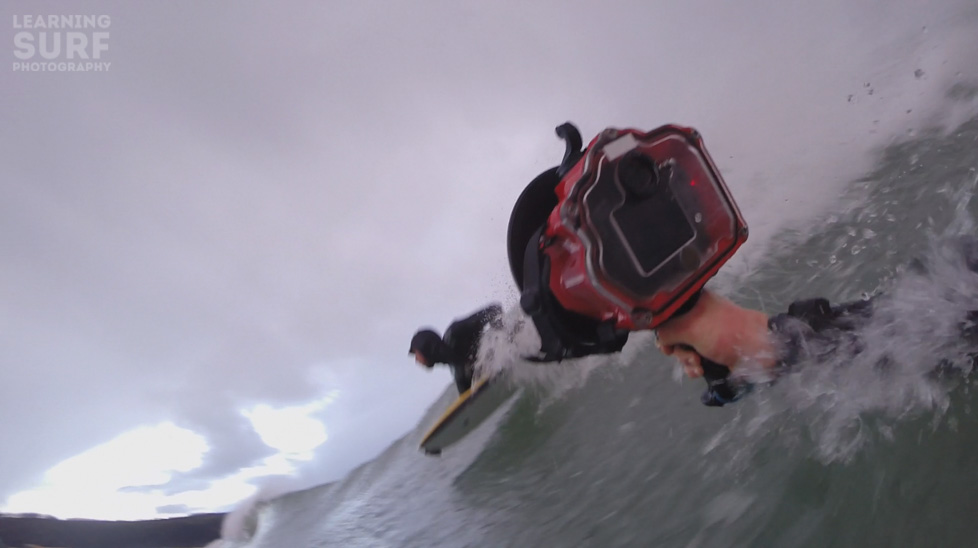 This is not ideal, as you can imagine, when you’re trying not to get pulled over the falls at a shorebreak, I didn’t have any major problems, just a couple of close calls, but when I stowed the GoPro near the end of the session I immediately felt so much more comfortable with one hand free to swim properly. 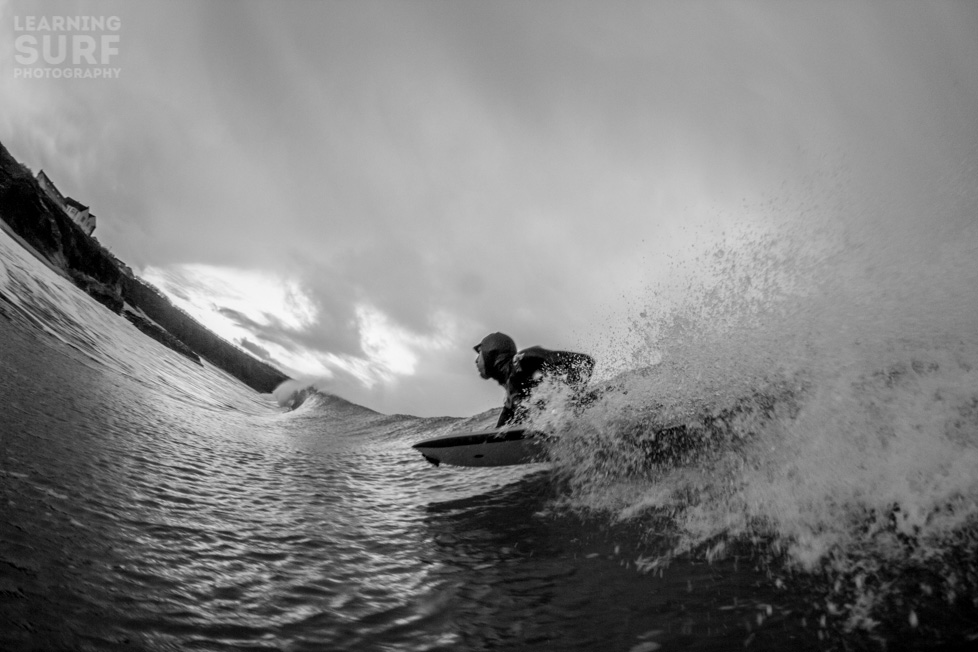 Next time I’m going to dig my helmet camera set-up out I think, although I don’t think it will fit over my hooded wetsuit very well, so I might have to improvise another type of rig to get the kind of shots I’m after and still be able to swim freely when it’s still cold.

More posts soon, here’s a link to the Facebook photo album from this day for some more photo’s: