View From a Blue Moon has been widely hailed as the best surf film ever, but what caught my interest early on was John John Florence’s choice of water housing.

What you might not realise is that John Florence, probably the best surfer in the world, is a keen photographer too.

One of the scenes shot in his Hawaiian home features his camera collection, and it’s followed by a very brief glimpse of John shooting in the water with a cheap water housing.

Just in case you haven’t seen the film, or you didn’t get the chance to frame grab all the surf photography related bits, I’m going to give you a run down of his kit.

I covered the same subject in June 2014 when Desilussion magazine did a video profile of John John which also talked about his photography, but there’s more to go on in this latest version.

In the film we hear John C Reilly’s voice over saying “these are John’s favourite cameras” and some quick shots of these cameras:

He uses the Leica M7 the most.

Notice how all but two of these cameras shoot on film, for his only digital options he’s gone for the Red Dragon for video, and the Sony A7 full frame mirrorless series for stills (and video).

The Red Dragon is a professional video camera that requires a lot of extra kit to make full use of.

Tthe Sony A7 series are really popular mirrorless cameras that are able to use most of the old film lenses he has available, so it makes sense that he’d go for that as a digital option, even if he mostly uses the Leica M7.

Which water housing does John John Florence use?

The next scene, or rather clip, is John shooting in the water, he’s using a $60 Dicapac flexible case, it’s not clear which camera he’s using inside it but the sequence of shots implies that it’s the Leica M7. 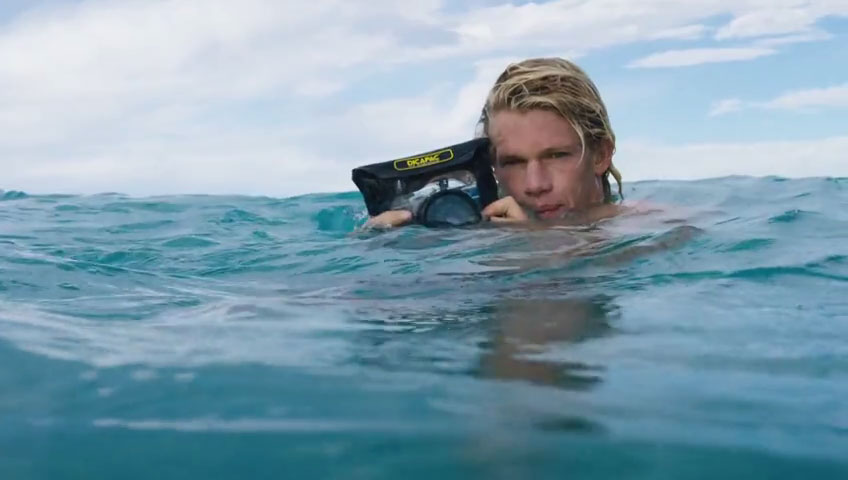 The Dicapac is one of a few options in the flexible case style of housing.

The most well known are probably EWA Marine (~$400) and Aquapac (~$110), I’ve used the Aquapac DSLR case myself, and I’ve still got it in the garage in case I need a backup option.

These kinds of cases are not ideal for shooting surf with a modern DSLR or mirrorless camera because they don’t have a pistol grip for one handed operation and they’re not as hard wearing as a rigid housing.

I’ve had the best experience when shooting from a channel with a relatively long lens, if you can hold the camera in both hands they can give you pretty good results.

If the best surfer in the world uses his in head high waves on the North shore of Oahu to protect over $7,000 worth of camera gear then he must be pretty confident in its ability to keep everything inside dry.

Which water housing would you recommend?

For a 35mm rangefinder camera like the Leica M7 you’re going to be hard pushed to find a modern surf style housing off the shelf, so I’d recommend getting one custom made.

I know that Trent Mitchell has a custom Dave Kelly housing for a Hasselblad XPan for instance, so it’s certainly possible to get something made for this kind of camera.

For custom housings your options are fairly limited, as far as I know a couple of the big names (Del Mar, Dale Kobetich) are no longer making them.

If you’re in the US I’d contact CMT, SPL or HCW to see if they can make something for you, if you’re in Europe try Water housing solutions, and if you’re in Indonesia (or nearby) try Liquid Eye.

For the Sony A7 series I’d go for an Aquatech Elite series, they’ll offer much better protection and ergonomics for surf photography than the Dicapac, although they’re a bit more expensive at around $2,500 for a full set-up.