I had three of my photo’s published in the most recent issue of Wavelength surfing magazine, two water shots and one double page spread of a line up from the land.

I’ll talk you through them here, anyone who’s got a copy can turn to page 22/23. 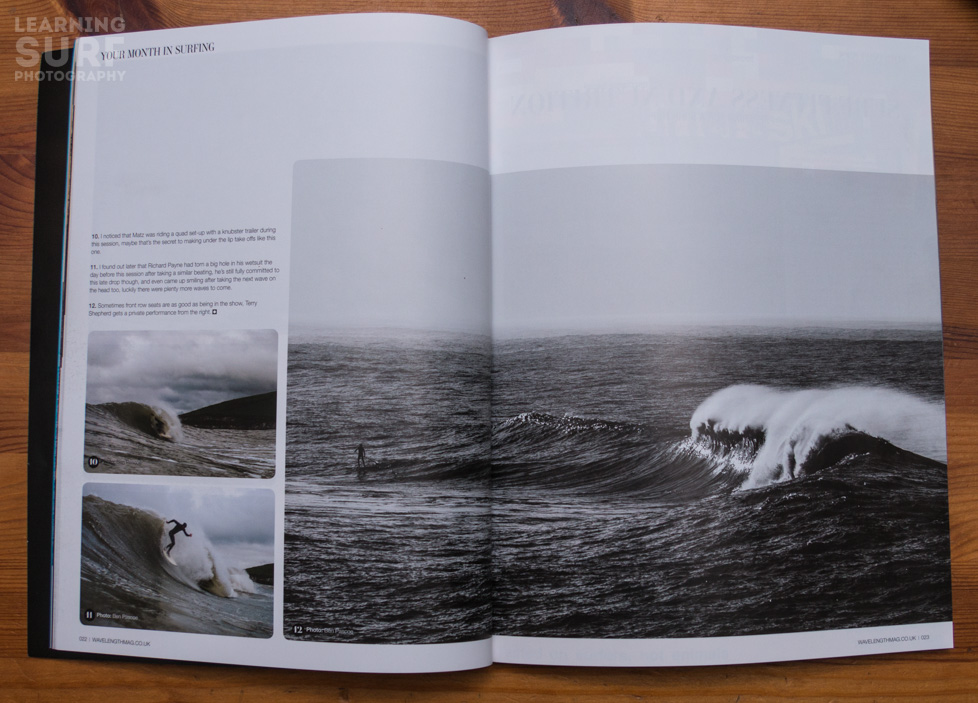 Starting with the top image of the smaller two, this is Matz Ginman Trout in a little wedgey barrel, there were lots of bigger waves this day but this one bowled nicely and he got a good cover up, I’ve got a whole sequence of the wave and this one was the one I preferred the most, he’s in the barrel but not obscured too much and it’s pretty clear he’s going to make it.

I was also asked to provide captions and one tip I heard in the excellent Surf Splendor podcast interview with Steve Pezman, creator of The Surfers Journal, is that a good caption doesn’t tell you what you can see in the photo.

In a couple of other shots from the session I’d noticed that Matz had a knubster trailer in his board, I also know that new Wavelength editor Tim Nunn has a self confessed obsession with fins, so this felt like a good little nugget of info to throw into the caption for this pic’.

The second shot features Rich Payne, this wave started out looking like it was going to offer a pretty straight forward take off, but a little lump pushed up the face at exactly the wrong time causing the pretty critical air drop you see in the sequence, I shot video from my GoPro on top of the housing too and this wave is pretty classic in slow motion.

This was the first wave of the set which is bad news for Rich but good news for me as a photographer as there was no white water on the face, I like the perfect ramp of the wave face on this one with the lines of water adding texture, it would have been much easier to bail on this wave but the commitment and resultant running man pose make it, that’s something to remember for budding surf photo subjects, always commit to your manoeuvres.

Both shots were taken with my current favourite water set-up, the Canon 70D body with Canon 28mm f2.8 lens in my Aquatech housing, I had it in Shutter Priority at 1/1000 of a second and the lighting was pretty consistent so all the shots were at f5 and ISO 100.

I did have to put the focus mode in AI Focus rather than AI Servo to get the fast burst out of the lens, but I didn’t get any out of focus shots really, so I lose the clever focus tracking but gain a much higher continuous burst rate, read more about getting the best fps you can in my recent post on the subject.

Now the main event, this one’s my favourite, I was stoked when it got picked out (I sent in 6 photo’s for consideration in total) because I wasn’t sure it would be what the magazine were looking for. 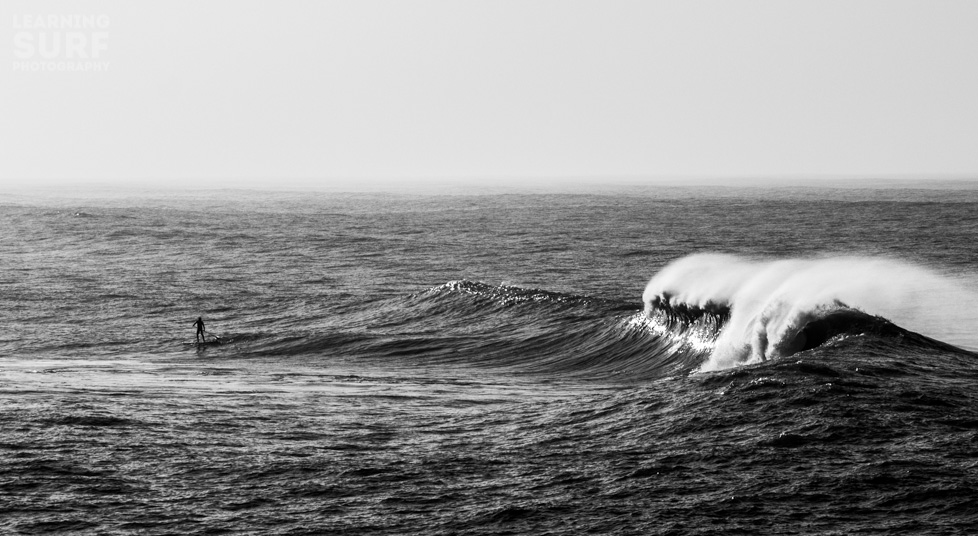 It’s got Terry Shephard paddling his SUP in the photo, in terms of composition and adding scale to the wave I think he totally makes the picture, but I know SUP in waves is a bit frowned upon in mainstream surf media, it’s almost like having a bodyboarder in the shot, I had also cropped it into a more panoramic aspect ratio and done some pretty heavy processing on it.

So I was pleasantly surprised when I was asked to send over hi res jpegs, that means that my processing and crop was going to be used as well as my photo, and I was even more pleased when I opened up the magazine and saw that I’d gotten a spread too.

Here are some extras from the session featured in the two water shots that I liked, including a still fro the GoPro that you can compare to the shot from the 28mm lens.

I had it set up in 1080p mode at 60fps in medium field of view, as you can see it’s much wider than the 28mm as you’d expect, Matz sensibly straightening out on one of the biggest waves of the day

almost a cracking shot, I kind of like it still

P.S. Another happy coincidence is that I chose the main photo featured as a double page spread in the magazine I had printed up myself using the Blurb service, I even used the same exact file to send over to Wavelength.

So I am now able to compare a professionally mass printed magazine you can buy in the shops directly with the Blurb home made option, I am happy to report that it looks just as good in both magazines, I might go into more detail and do some close up macro shots of them both to compare, but that’s for another day.