If you shoot surf photos with your GoPro you have probably looked into a pistol grip style trigger for it already, I’ve done my research, tested out the options and come to the conclusion that KNEKT currently make the best option for surf photography. 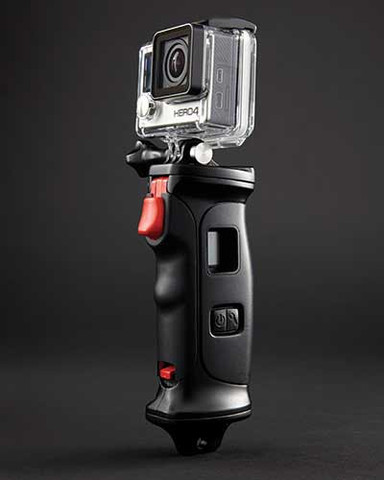 The Gripix GoPro trigger handle, image from their website

The pistol grip shaped handle has a slot into which you insert an official GoPro WiFi remote (it’s compatible with the original style and the new GoPro Smart Remote) and a trigger button where you’d expect to find one. It’s not really obvious from the product shots but the trigger obviously engages with the pause/record button on the remote, allowing you to start or stop recording or release the shutter depending on what mode the camera is in.

There’s also a “suitcase handle” style configuration called the Low-Pro and an extendible “high-top” pole which incorporate the Gripix GoPro Trigger in the design as you can see in their promo video:

I don’t see much of an advantage for shooting video with a trigger type set-up, as you don’t need to be able to time the start or stop of video accurately like you do when shooting stills, you just set it going and then point it in the right direction, so the video focused Low-Pro grip is a bit of a mystery to me, it also obscures the view of the LCD if you’re using one which isn’t ideal.

If you want this style of handle without paying the premium for the WiFi remote slot you can get something like the Opteka X-Grip for just over $20, then just add the cheap and useful tripod adapters for $7 if you don’t have them already for a very equivalent set-up for a fraction of the price.

The $140 High Top pole looks good and I expect for most above water uses it will be the most useful way to use the pistol grip, just like the very similar $65 SP gadgets remote pole. I don’t see it being as useful for surf photography for one reason:

If you’ve seen or read my review of the options I’ve used for shooting waves and surfers, you will know that I quickly passed over the SP Gadgets remote pole in favour of an option with a mechanical trigger mechanism, I found that I would lose WiFi connectivity when I went underwater with the SP Gadgets pole, and I didn’t have to go far underwater either.

As you can see from this YouTube video, the remote has to be practically touching the camera in order to work underwater, so the Gripix Low-Pro and High-Top set-ups are going to be constantly dropping the WiFi signal if used for surf photography, the bare trigger will likely do better as the remote is pretty close, but I wouldn’t want to count on it working when shooting waves.

I’d like to get a closer look at it and see what the material above the remote is like in the handle, if there are any metal fixings to secure the GoPro mount above, or as part of the mechanism to enable the trigger button to engage with the remote, then the WiFi range will suffer and it could make for a very frustrating experience if you’re using this for surf photography.

Should I Order a Gripix Trigger For Surf Photography?

I’d say probably not, based on my experience with the SP Gadgets remote pole, it might be OK, especially with the newer smart remote which I haven’t used, but something like the KNEKT GP4 with a mechanical shutter release trigger is never going to lose signal.

Also, the Hero 4 Black Edition is not supplied with the WiFi remote like the Hero 3 and Hero 3+ black editions were (I got my remote with the Hero 3+ black edition I bought), so even if you bought the top of the line camera you’re going to have to buy the WiFi remote too, if you want the new smart remote that’s an extra $150 to add to the $99.95 you’re paying for the pistol grip.

Another minor thing is the GoPro mount that the housing attaches to on the top, it’s moulded into the actual handle, allowing you to spin it around and shoot selfie style when necessary, this means you’re not easily going to be able to use some of the bigger Gopro accessories that overhang the housing like the KNEKT dome for instance.

You could also argue that battery life is going to be lower when you’re using the remote, and you need to remember to charge the remote as well as your camera before getting to the beach, and remember to bring the remote itself too, otherwise your trigger is completely useless. This might sound trivial but the first time you drive to the beach and forget one of these things you’re going to wish you had a mechanical style trigger.

I’d love to hear from you in the comments if you’re planning on getting one or especially if you’ve used one for surf photography, I could be wrong and it might be a great way to get shots, but I’m sticking with my current recommendation until I hear some compelling arguments for this style of WiFi trigger.